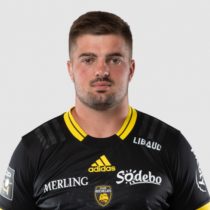 Born in Condom-en-Armagnac in the South West of France, Alldritt is qualified for both France and Scotland with his father, Terence.

Alldritt didn't feature for France at youth level but represented Auch 14 times scoring two tries before he signed for La Rochelle in 2017.

He broke into the first team and made 10 appearances for the club with his ability to play across the back row.

2017/18 season was a breakout season for Alldritt but the 2018/19 season was when he exploded onto the scene as earned a call up to the France 2019 Six Nations squad.

In May 2018, he committed his future to La Rochelle until 2021 after a breakout season with the club.

He scored his first try off the bench against Scotland in his third cap and doubled up as France ran out 27-10 victors. He earned his first start on the flank against Italy a week later in Rome.

Alldritt went on to represent France at the Rugby World Cup making 4 appearances at the showpiece starting 3 times taking his test cap tally to 11, with all three of his caps going against Scotland.

He went into the 2020 Six Nations with 11 test caps and three tries with 5 caps in the Six Nations.