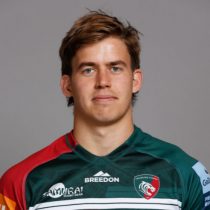 Growing up in Sydney and attending The Scots College, Guy Porter is a strong ball-runner who reads the game well.

Porter has been a consistent performer both in the Shute Shield and the NRC over the past couple of seasons and joined the Brumbies as part of the wider training squad. He was also a part of the Sydney Stars in 2015 and the Waratahs U20s Gen Blue squad in 2016, lining-up with the Sydney Rays in the NRC a year later.

A versatile back, Porter is seen as a powerful centre that can also cover wing and fullback. Fresh off of leading Sydney University to victory in the Shute Shield in 2019, they defeated Warringah 21-16 in a come from behind success in the Grand Final, centre Guy Porter signed with the Brumbies for the 2020 season.

The English-born centre arrived in Leicester in July 2020 from the ACT Brumbies in Super Rugby.

Comfortable on the wings and in the centres, Porter played 21 of Leicester's 26 matches during the 2021/22 season dotting down five times and assisted a further five tries as the club went on to win the Premiership.