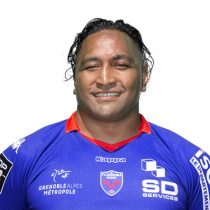 Born in Tonga, the giant prop emigrated to New Zealand at the age of 17 and it was there where his rugby career began with Otago. After impressing at regional level, Aulika was offered a contract with the Highlanders in Super Rugby but failed to make any massive impression.

In 2012, Aulika left New Zealand and linked up with London Irish in the English Premiership. He spend four seasons at the side before announcing his move to Sale Sharks for the 2016/2017 season.

He played in the 2011 Rugby World Cup for Tonga in New Zealand. He was also a member of Tonga's Pacific Nations Cup Squad in 2015.

In 2018, Aulika confirmed that he would leave Sale Sharks to join Grenoble.