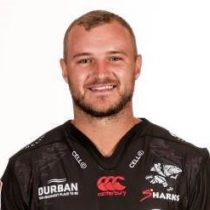 Playing his school rugby at Monument High School, Venter first started his junior provincial rugby with the Lions U18s in 2010. A move to the Sharks in 2012 saw the scrumhalf running out for the U21 team and getting his Vodacom Cup debut. Continuing his fine form in the 2013 Vodacom Cup, Hanco was then selected to represent the Baby Boks at the 2013 IRB Junior World Championship.


Venter went on loan to the Leopards in 2015 and has since returned to the Sharks and has been a consistent squad member of the Sharks Currie Cup & Vodacom Cup squads.

He was named in the Sharks 2017 Super Rugby squad and will look to make his Super Rugby debut.