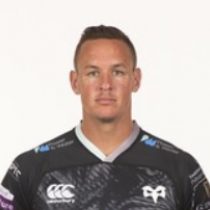 An elusive runner with a tremendous turn of pace, Dirksen won the 2011-2012 Pro 12 try of the season thanks to his virtuous effort against Edinburgh. Dirksen made his Ospreys debut in 2009, and has been a regular part of their side since 2011.

Born in South Africa, Dirksen grew up in the United States and represented them at U17 and U18 levels. Dirksen came to Europe in 2008 on a student visa and played amateur rugby for Truro College, Neath Port Talbot College and Swansea RFC before joined Ospreys professionally in 2011.

Dirksen was eligible to represent Wales in 2004 through residency and, as things stand,Dirksen can play for the USA, South Africa and, since 2014, Wales.

He signed a three-year Ospreys contract in May 2014, keeping him at the Liberty Stadium until the end of the 2016-17 season.

In February 2017, he re-committed to the region until at least the year 2019, following on from Sam Davies, Justin Tipuric, Dan Baker and Dan Lydiate in committing his future to the region.

June 2019 saw him sign a new two-year deal with Ospreys.