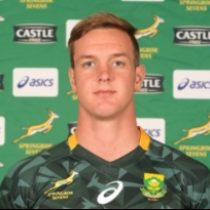 Having represented Eastern Province at youth level Heino Bezuidenhout was selected in the SA School side in 2014 & 2015.

The powerful centre moved to Pretoria after school where he represented the Blue Bulls in the u19 & u21 Provincial Champs in 2016.

In 2017 he was named in the Tuks Varsity Cup squad.

He was then involved with the South African Sevens Academy and received his first call-up to the senior side for the 2018 Hong Kong Sevens.