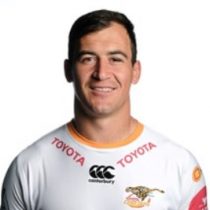 Nephew of former Springbok flanker Ruben Kruger, Henco represented the Cheetahs from under 13 right through to the senior side.

He made his first-class debut for the Free State Cheetahs in the 2012 Currie Cup Promotion/Relegation series against the Eastern Province Kings.

He was included in the Cheetahs later that year. In 2014 he was called into the Cheetahs Super Rugby squad and made his debut against the Lions. Venter studied at the University of the Free State and represented Shimlas in the Varsity Cup between 2013 and 2015.

He played In his final year of Varsity Cup rugby in 2015 and was named in the Dream Team at the conclusion of the tournament. He became a regular in the Cheetahs Super Rugby and Currie Cup squads making a total of 30 Super Rugby appearances before the Cheetahs joined the Pro 14 in 2017.

At the end of the 2017/18 season Venter joined Japanese side Toshiba Brave Lupus.

In January 2020, Venter was named in Sharks squad for the 2020 Super Rugby season.