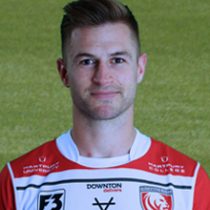 Born in Swindon, England, Trinder is an exciting outside centre who can also operate on the wing. Trinder's professional career began in 2007 when he signed for Gloucester and he made his debut for the club late in the 2007-08 season against Sale Sharks. Since the 2007–08 season Trinder has been dual-registered with Moseley and can play for either club.

Trinder has represented his country at U20 and Saxons level, and played for England in a non-cap international against the Barbarians.

The 2016/17 season saw him make his way back into first team contention as he made 12 appearances.

Trinder started the 2017/18 season in fine form, with a run of Man of the Match performances and eye-catching moments including a brace in the Round 6 win over Northampton Saints.

The centre, who has spent his whole career with the Cherry and Whites, racked up over 162 competitive appearances as he heads into the 2019 Champions Cup and has scored 225 points.