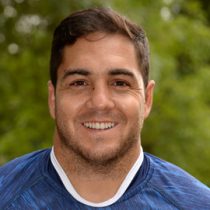 Hailing from Buenos Aires, Argentina, Agulla has been an ever present in the Argentinean national side since making his bow on the international stage back in 2005.

Comfortable operating on the wing, in the centre or at fullback, Agulla's career began at amateur level in Argentina with Hindu Club before he made the move to Dax in France. Since then the diminutive framed Agulla has gone on to represent Brive, Leicester Tigers and Bath.

Agulla signed for Castres in 2016 and helped his side to qualify for the Top 14 playoffs in 2017, where they were narrowly beaten 26-22 by Toulon. Agulla was selected in the Barbarians squad that will face England and Ulster in June.

After 10 years of playing in Europe Horacio Agulla returns to Hindú. The 32-year-old winger announced his departure from Castres’ at the close of the 2016-17 season.