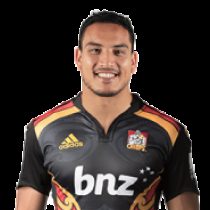 Hosea currently holds the record for most tries in a provincial season with 14 in the 2008 Air New Zealand Cup. He has played for the New Zealand Maori on several occasions. After his outstanding performance for Wellington in the 2008 Air New Zealand Cup, he was chosen for the All Blacks to tour Hong Kong and Europe on 26 October 2008 and made his debut against Australia in the Bledisloe Cup on 1 November. In 2010 Gear made his Rugby Sevens debut in the 2010 Commonwealth Games for New Zealand and was chosen for the All Blacks end of year tour. After an injury to Cory Jane, Gear was given a starting spot against England, a game in which he scored the first try. The following week vs Scotland Gear once again scored the first try and then went on later to score another in the All Blacks 49–3 win. After a string of injuries to the All Black's Rugby World Cup 2011 squad, Gear was called up prior to the semi final match against the Wallabies. However, he was not named in the twenty-two man team to play the match. He received a World Cup winner's medal after the final which New Zealand won 8–7, but he was not in the match-day 22.