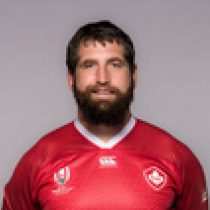 A hard-working prop at the coalface for Canada, Buydens made his senior international debut in 2006 against the England Saxons but missed out on Rugby World Cup selection in 2007.

He did however make the 2011 tournament where he played in all four pool games against Tonga, France, Japan and New Zealand

Buydens has developed his game with a stint at ITM Cup side Manwatau where he impressed the locals.

Buydens featured for Manawatu until 2016 before moving to San Diego Breakers and later represented NOLA Gold in the maiden Major League Rugby season.

With over 50 caps to his name, Buydens has been included in Canada's Pacific Nations Cup and could feature in his third World Cup in Japan.