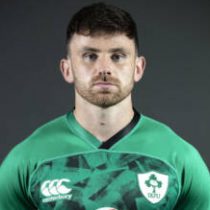 Keenan, a starter for the Blackrock College 2014 winning Senior Cup Team alongside Jeremy Loughman, Joey Carbery and Munster's Conor Oliver. He joined the Leinster academy following his impressive performances with UCD and Ireland U20 side that reached the final of the World Cup in Manchester, 2016.

A winger, with the qualities to play anywhere across the back three, he possesses a strong aerial presence and an ability to beat defenders with ease.

Keenan made his Leinster debut v Zebre (A) 5/11/2016. He has played with Leinster 'A' in the first two rounds of the British & Irish Cup on the right-wing, Zebre match was his first senior matchday involvement.

He scored his first try for Leinster against the Dragons in December 2018 and by the end of the 2018/19 season, he had five caps for Leinster and signed a new senior deal.

In October 2019, he was named in Leinster's squad for the 2019 Champions Cup, where he made his debut in the tournament.

As of November 2019, Keenan has made 10 senior appearances for Leinster and has scored 5 points.

He made his debut for Ireland in October 2020 in a Six Nations match against Italy, where he started on the wing and scored two tries in a 50-17 win.