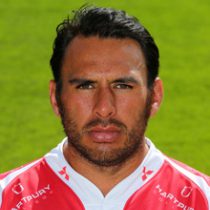 Hailing from Ashburton in New Zealand, Edmonds has developed into a quality hooker over the course of his career.

After three largely unsuccessful years at the Waratahs, Edmonds enjoyed a stint at the Stormers before linking up with the Brumbies during which time he earned a call up to the international stage with the Wallabies.

In the summer of 2012, Edmonds signed a deal with Gloucester in the Premiership, where he made 42 appearances before making a move to Narbonne in the ProD2.