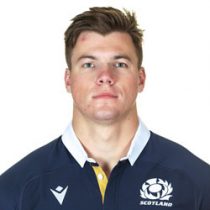 Scottish-born Jones came to Cape Town on a gap year before enrolling as a full-time student and rugby player at the University of Cape Town (UCT).

In 2014 he made 9 appearances for UCT and scored the opening try of the Varsity Cup final where his team were victorious. On the back of the Varsity Cup success, Jones was called up to the Western Province Vodacom Cup side where he continued to impress.

He was included in the Stormers Super Rugby squad for 2015 and 2016. He reached the final of the Currie Cup in 2015 and became the first Stormer to score four tries in a single Super rugby game.

In a surprise move, Jones was called up to tour with Scotland for their test matches in Japan in June 2016. He made his first Test start for Scotland against Australia in the Autumn International at Murrayfield. The Edinburgh-born, England-raised and South Africa-based centre personified Scotland's all-action approach as his two first-half tries helped secure a 17-10 half-time lead.

Jones was named man-of-the-match. He linked up well with fly-half Finn Russell en route to the narrow defeat. He also started the next fixture in the win against Argentina, injuring himself while setting up Maitland for a try on way to securing a win for the Scots.

In 2017 the centre was included in the Scotland national squad his debut Six Nations tournament. Played in all five matches scoring two tries.

He signed a two-year deal with Glasgow Warriors in February 2017, that saw him leave the Stormers at the end of Super Rugby.

Jones has scored 25 points in 23 Super rugby caps since his debut in 2015. He rounded off his time in South Africa by winning the 2017 Currie Cup with Western Province and was a standout in the tournament.

In 2017 he made his 6 Nations debut in Scotland’s opening game against Ireland at BT Murrayfield, a match which they went on to win 27-22. Jones started every match for Scotland in 2017, scoring two further tries against England at Twickenham.

In the 2018 6 Nations he was one of seven players to start every match for Scotland and continued his prolific try-scoring, touching down against France and twice in the historic Calcutta Cup win over England at BT Murrayfield.

In December 2018, Glasgow Warriors confirmed that Jones had signed a new deal with the club that will see him remain at the club until the end of the 2020/21 season.

Jones' 2019 Six Nations campaign was cut short after two games and he returned from injury during the PRO 14 quarterfinals.

After being omitted from Scotland's 2019 Rugby World Cup squad, Jones was recalled for the 2020 Six Nations Championship.