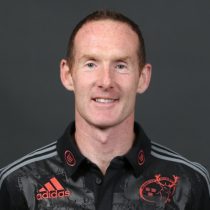 Born in Dingle, County Kerry, Ian grew up in Limerick and went onto complete an Honours Degree in Sports Science at the University of Limerick. He has been credited for aiding the skill development of a number of Munster’s current rising stars.

A former centre and outside half, Costello worked with the Munster Rugby squad from 2010 to 2016 holding roles at Under-20, A and Academy level, before assuming the role of Munster A head coach in 2011 where he led the side to a British and Irish Cup title.

In April 2016 Castello was named the Nottingham where he held the role as the sides head coach.

Since his move across the water, Costello has played a key role in managing a successful and sustainable development pathway for both players and coaches at the club, working alongside Premiership clubs such as Leicester Tigers, Northampton Saints, Worcester Warriors and Wasps to establish strong links for dual-registered and loan players.

After a ninth-place finish in the 2016/17 campaign, Costello helped Nottingham to fourth place in December 2017, before he signed a deal to join Wasps' coaching team for the 2018/19 season.

He was retained by Wasps' following Dai Youngs' departure.