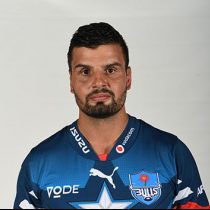 The talented second-rower was included in Maties 2014 Varsity Cup squad and represented Western Province in the Vodacom Cup that same year.

He became a key member of the Maties Varsity Cup squad over the next 3 years helping the side to consecutive finals in 2016 and 2017.

He made his Currie Cup debut for Griquas in July 2019, starting their opening match of the 2019 season against the Sharks at lock.

He made his Super Rugby debut for the Bulls in March 2020, starting at lock against the Highlanders.

As of June 2020, he has 2 Super Rugby appearances. Groenewald signed a deal to join the Cheetahs later in 2020.