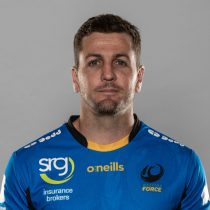 A hard worker and good listener, Prior has worked hard to improve his game since moving to Canberra after the 2011 Super Rugby season.

A former Reds scrumhalf who played understudy to Wallabies skipper Will Genia on their way to the 2011 title, Prior’s quick service has allowed the Brumbies forwards to gain momentum at key points throughout the season.

Guiding his forward around the park and providing plenty of clean ball for the flyhalf made the Brumbies look cohesive, together and ready to challenge anyone who comes in their way.

Prior’s second professional tour of South Africa and first with the Brumbies gave the scrumhalf plenty of time to shine. His try against the Bulls in the latter parts of the fixture was a just reward for one of the team’s hardest grafters, in training and on game day.

Ian Prior will run out in the blue jersey again in 2019 with the classy flyhalf entering his sixth season with the Force. Prior’s reliability and consistent play have been an invaluable asset for the Force.

His quick-footed play makes him a major threat on the attacking end and alongside his golden boot, Prior will be sure to continue to keep the team honest throughout the season.

Prior returned to the Western Force following a brief stint with Harlequins in the English Premiership in 2018.