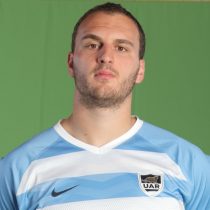 June 2016 saw him being called up to join the Pumas for the Rugby Championship.

Larrague was named in the 2017 Jaguares Super Rugby squad.

He made 5 appearances during the 2017 season but was not included in the squad for the 2018 season.

Despite not featuring for the Jaguares, Larrague was included in the Argentina squad for the Rugby Championship and will look to make his test debut in the competition.