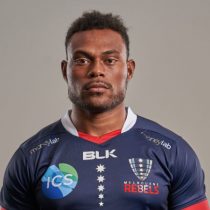 A former Brisbane Broncos development player, Ilikena Vudogo made the switch to rugby union in 2020 having spent time with the Fijian Sevens’ senior squad in 2019.

Prior to his Queensland stint, the speedster starred for Fiji in the 2018 World Rugby Under-20’s tournament in Romania, producing a series of breathtaking performances at outside centre, leading to Vudogo claiming the player of the tournament award.

He joined the Rebels ahead of the 2021 Super Rugby season.