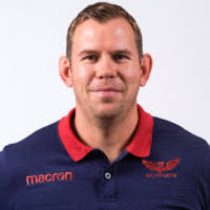 A former Llanelli RFC skipper, Ioan Cunningham is an up and coming coach in Wales having already made an impact at Scarlets and in the youth levels in Wales.

Hailing from the Amman Valley, the former Wales Under-18s back-rower played more than a century of games for Llanelli RFC, leading the club to a Welsh Cup final victory in 2005.

However, the strength of the Scarlets back-row resources at the time meant opportunities were limited at regional level.

He cut his coaching teeth with the club side and the region’s academy, before heading up the Anglo-Welsh Cup and British and Irish Cup squads.

During his coaching career so far, Cunningham has worked with Wales U20's as well as being the National Academy Skills coach.

Since 2015, he has been the forward's coach at Scarlets.