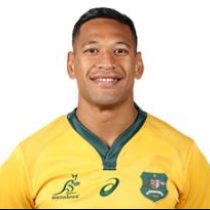 A highly acclaimed and exceptionally talented rugby league player, Israel played 90 games for the Melbourne Storm (including two Grand Finals) and Brisbane Broncos from 2007-10 before announcing his switch to join the AFL in June 2010.

In two years with the Greater Western Sydney Giants, he played 13 games for the western Sydney side in their debut AFL season, making his debut in the code against the Sydney Swans in round one of 2012, playing as a key forward and occasional ruckman.

Having broken the NRL’s record for most tries in a debut year and earned the Dally M award for Rookie of the Year in his inaugural season with the Melbourne Storm in 2007/8, he went on to make history as the youngest rugby league player in history to represent Australia (18 years and 194 days).

Signed by the Storm on the back of his performances in the championship, he won his first premiership whilst playing for their feeder club Norths Devils and, at the age of 16, became the youngest player to represent Queensland Under-19s.

After just 14 games in Super Rugby, Israel made his international debut against the British and Irish Lions at Suncorp Stadium, scoring the opening try.

Izzy proved to be a vital member of the 2013 Wallaby side, recording 15 test caps. His 2014 record followed trend, with stunning performances against France in the June Test Series and reliable excellence throughout the international season leading to his runaway win in the race for the John Eales Medal.

Folau has become one of the most well-known rugby players globally. He was included in the Australian Rugby Championship squad and managed to seal his place in the squad for the 2015 World Cup.

Folau was in fine form during the 2017 June internationals and Rugby Championship scoring 12 tries in 10 matches - a record for most tries by an Australian in a calendar year.

In October 2017, Folau claimed his third John Eales medal, capping off an outstanding Test year with the Wallabies. Set a new Australian record for tries in a calendar year with 12 in his 10 tests, failing to cross the line in only two matches.

In May 2019, Folau's four-year contract with the Waratahs and Rugby Australia was terminated following controversial social media posts that were deemed to constitute a high-level Code of Conduct breach.

Folau scored 37 tries in 73 tests for the Wallabies and overtook Doug Howlett's record for the most tries in Super Rugby scoring his 60th try in what was his 96th and final game for the Waratahs.