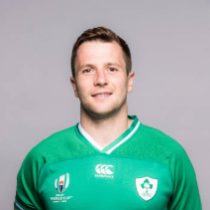 Carty attended Marist College, he played soccer with Hudson Bay Celtic, and formed a central defensive pairing with Robbie Henhsaw on the Marist team that won an Under-15 All-Ireland Schools Cup. Carty received attention playing with Bucaneers in 1B of the UBL.

Despite still being in the Connacht academy, Carty made his first appearance for the senior Connacht team in September 2012, in a match against the Glasgow Warriors in the 2012/13 Pro12.

Carty has represented Ireland at various under-age levels internationally. He was named in the Ireland Under-20s team and represented them at the 2012 IRB Junior World Championship.

The product of the Connacht Academy impressed well enough and his stay at Connacht was extended until 2021 when at the time of his extension in early 2019 he had represented Connacht 118 times.

In January 2019, he was included in the senior Ireland squad ahead of the 2019 Six Nations tournament.

After his 2019 Six Nations selection and debut he was selected in the RWC Training squad with 3 caps to his name.

Connacht's Supporters' Player of the year