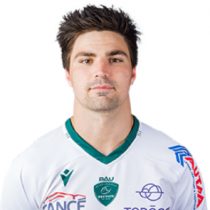 In his final year of school, Jack focused on his Cricket for Scots College and only played a handful of rugby games.

The New South Welshman, a first-grade cricketer on scholarship with Sydney University, was the only Australian player to play every minute of the 2016 World Rugby U20’s Championship, appearing in all five games at fullback.

Away from sport, Jack is studying at the University of Sydney a Liberal Arts and Science degree.

In June 2016, The Australian U20s star signed a two-year contract with the Melbourne Rebels after turning down an opportunity to pursue a professional cricket career.

The versatile back made 15 appearances scoring 9 tries for the Rebels in 2018 taking his cap tally to 21 in the competition.

At the end of the season he was named as the Rebels Rookie of the Season and was selected for the Wallabies' Rugby Championship squad.

Maddocks scored off the bench on his test debut against New Zealand and started the following match against the All Blacks at Eden Park.

He made 7 appearances for the Wallabies in 2018 but missed out on selection in 2019, ultimately missing the Rugby World Cup.

He took his Super Rugby cap tally to 35 by the end of the 2019 Super Rugby season scoring 19 tries for the Rebels before signing with the Waratahs ahead of the 2020 season.

Having missed out on the World Cup, Maddocks' switch to the Waratahs saw him return to the Wallabies squad after a stellar 2020 campaign in NSW.

He played in all 14 games and score three tries for the side over the Super Rugby and Super Rugby AU season.

2018 Rebels Rookie Of the Year