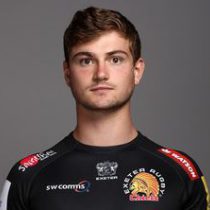 Following in the foot steps of his father who was a previous Exeter Chief, Jack broke into the senior set-up in 2015.

Initially starting the campaign on dual-registered terms down at Plymouth Albion, his recall to Sandy Park following injuries to Will Chudley and Dave Lewis, meant he was literally thrown in at the deep end by head coach Rob Baxter.

His Premiership debut was against Bath in October 2015 and by February, he had made eight appearances in the competition and scored a maiden try in the 35-35 draw with Wasps at Sandy Park in his seventh game.

Such is Maunder’s talent, however, he flourished immediately, making his first team debut against a star-studded ASM Clermont Auvergne in the European Champions Cup in October 2016. Undaunted by the challenge put in front of him, Maunder would not only finish the season as a Premiership champion, but he was one of five Exeter players selected by England head coach Eddie Jones to tour Argentina.

And it was during the First Test in Santa Fe that Maunder appeared off the bench, helping to create a winning try, that he won his first international cap.

The 2018/19 season, Maunder enjoyed a decent battle for the No.9 jersey alongside the likes of Nic White, Stu Townsend, Joe Snow and, younger brother, Sam.

In February 2019, he signed a new one-year deal with Exeter Chiefs.

In March the following year, he was called up to the England Six Nations training squad ahead of the Round 4 clash against Wales.

April 2020 saw him sign a new deal at Exeter Chiefs just days after fellow England internationals Ben Moon and Harry Williams said they were staying put at the Devon club on new contracts.