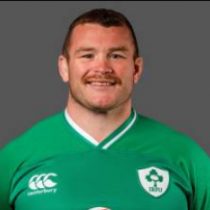 Born in Dublin in October of 1989, the former St Marys School's pupil is a powerful scrummaging loosehead. His professional career began in April of 2010 when he made his debut for Leinster against Glasgow in the Celtic League.

He played as a replacement for Leinster three successive PRO12 finals; losing to Ospreys 2012, and winning against Ulster (2013) and Glasgow (2014).

The former Irish under 20 international has been included in various Irish training squads and was rewarded for his sharp progression with a call up to the Emerging Ireland's 2013 summer tour in Georgia.

A string of impressive performances to begin the 2013/2014 Rabo Direct Pro 12 and Heineken cup competitions led to McGrath's elevation to the Irish Senior Squad for the November Internationals, where he marked his senior debut starting at Loosehead against Samoa.

The 2014/15 season was a big one for the young prop forward, as in Cian Healy's absence McGrath managed to star for Leinster at the loosehead position. For Ireland, McGrath starred in the 6 nations in 2015, again in Healy's absence, and that led to his inclusion in Ireland's final 31-man squad for the Rugby World Cup.

He played in all five games at RWC2015 starting against Canada & Italy.

McGrath has cemented himself as Ireland's starting loosehead prop.

At the end of the 2018/19 season McGrath played 7 times for the Lions, 54 times for Ireland and represented Leinster 145 times scoring 12 Tries

McGrath was named in the Ireland squad for the Six Nations 2020 with 56 caps.