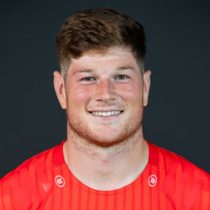 The Waterford man is a product of the Munster youth's system having previously captained his club side Waterpark to an U17 Munster title in 2011 and the year previous was part of the All Ireland winning Waterpark U17 side that defeated Enniscorthy in the decider.

In April 2012 he captained the Ireland U18 Club side against France and England, and then made his British and Irish Cup Munster A debut at 18 years of age against Rotherham Titans in December 2012 after featuring in the Munster U20s interprovincial series.

He featured for the Ireland U19s in 2013 before getting a call up to the U20s squad for the IRB Junior World Championship in France where he played against Fiji. He captained the Munster U20s for the Interprovincial series in September 2013 and was selected for the Irish U20s squad in the 2014 6 Nations, starting in 4 games and picking up the man of the match award in the opening game against Scotland, scoring 2 tries.

One of 4 players named in their second Ireland U20 JWC squad in June '14 and captained the squad when they travelled to New Zealand for the tournament, playing in 4 games. JackO'Donoghue made his Munster Rugby PRO12 debut when coming off the bench for Robin Copeland after 57 minutes against Zebre in Thomond Park in September '14.

He scored his first Munster try against Cardiff Blues in February 2014, also scoring in his two subsequent appearances against Scarlets and Glasgow Warriors

He won the 2015 John McCarthy Award for Academy Player of the Year Award in April of that year. O'Donoghue came off the bench during the 2015 Pro12 Grand Final on 30 May 2015 and started at Openside Flanker for Munster against Treviso on 5 September 2015.

He became part of the senior set-up in 2015/16, penning a three-year deal that will see him advance to development status for season 2015/16 and full contract status from 2016/17. He made his European Rugby Champions Cup debut on 14 November 2015, starting the opening 2015–16 pool game against Treviso.

O' Donoghue earned his first international call up in the 2016 6 Nations after being brought into the side by Ireland coach Joe Schmidt. He made his international debut for Ireland in the November International against Canada in the Aviva Stadium.

He featured heavily in his first season as a senior player, appearing in 26 of the 28 competitive games. He would sign a contract extension in March 2017 that will see him remain at the province until at least June 2019.

O'Donoghue earned his second Ireland cap as a replacement against Japan in the Summer Tour to the USA and Japan in 2017. He became the first Waterford player to captain Munster in the professional era away to the Cardiff Blues in February 2018.

Ended the season with 30 appearances to his name but suffered a knee ligament injury in the PRO14 semi-final loss to Leinster and is expected to follow a long-term rehabilitation programme. In December 2018, O'Donoghue signed a new deal with Munster Rugby, committing to the province until at least June 2021.

He returned from injury away to the Ospreys in February 2019 and made his 100th Munster appearance against Leinster in May. His form led to a recall to the Ireland squad in January 2020 which saw him being included in Ireland's squad for the 2020 Six Nations with 2 caps.