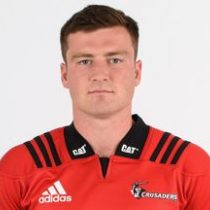 Stratton was called into the Crusaders squad for the 2015 pre-season games, as a short term replacement for Willie Heinz.

Stratton has been a consistent performer for Canterbury in Mitre Cup, despite being unable to push his way into the Crusaders 2017 Super Rugby squad.

In April 2017 Stratton was named in the New Zealand Barbarians squad to face the British and Irish Lions on 3 June 2017.

Stratton started the match and put in a solid 55-minute performance before being substituted.

Stratton was once again named in the Canterbury Mitre 10 Cup squad and helped the side yet another Premiership final.

Stratton was named in the Crusaders Super Rugby squad after the injury to Ereatara Enari.

This is will be his first Super Rugby season having already represented, Canterbury 23 times scoring 5 tries. Stratton made his Super Rugby debut against the Sunwolves but did not feature for the Crusaders again during the 2018 season.

The nifty halfback will join Waikato ahead of the 2018 Mitre 10 Cup.