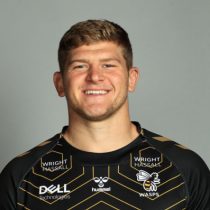 Willis joined Wasps Senior Academy from Henley College, having Captained the Wasps Academy U18 side.

At 20 the back rower made his Wasps debut against Sale Sharks in the Anglo-Welsh Cup in November 2016 and a week later a try in his first home game against Worcester Warriors.

Later that month the former England Under 20 international came on as a replacement against Sale Sharks to make his Premiership debut.

The Wasps Academy Player of the Season went on to make four Premiership appearances and eight first team appearances in total in 2016/17.

The 2017/18 season saw him included in the Wasps senior squad. In February 2018, he signed a new contract, keeping him at Wasps for the 2018 season which was followed by an England call up in June for the tour to South Africa

Willis didn't make his debut in South Africa but a surge in form that saw Wasps reach the 2020 Premiership Final saw Willis earn a recall to the squad off the back of being named the Premiership Player of the Season.

Wasps Academy Player of the Season 15/16