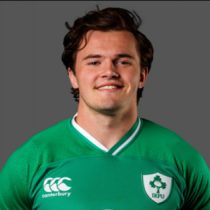 Stockdale began his rugby journey at Ballynahinch RFC minis and was further nurtured at Wallace High School, he was voted Dankse Bank Ulster Schools Player of the Year.

He entered the Abbey Insurance Ulster Academy upon leaving school in 2014 and played his club rugby with Queen's University.

Jacob represented Ireland at two U20 World Championships, making a significant impact at both tournaments, including the run to the 2016 Final.

The wing-come-centre made his debut for the senior Ulster side in January 2016 and made his first start against Dragons.

In May 2016, he was selected for the start of Ireland’s World Rugby U20 Championship campaign in Manchester. His forceful running and eye for the try-line seem to a guarantee a long future in the Ulster jersey.

In April 2017, Stockdale signed a new contract with the province after an impressive first season. Stockdale, who graduated from the Ulster Rugby Academy, has enjoyed a fine season to date with the senior squad.

The former Ireland U20 international has made starts on the left wing, right wing, at fullback and outside centre in one season alone, and showed the kind of potential that led to him being included in the Ireland squad for the summer tour to USA & Japan.

His excellent provincial form was rewarded with a call up to the Ireland squad for their summer tour, during which he made a try-scoring debut against the USA, before also featuring in one of the games versus Japan.

Following the November Internationals and the opening two weekends of the Six Nations, Stockdale now has a six tries in as many games for Ireland, including a brace of scores in the recent win over Italy.

In February 2018, Stockdale signed a new deal with Ulster that would keep him at Kingspan Stadium until the summer of 2020.

He ran in 11 tries in his first nine appearances for Ireland and registered the try that secured Ireland's first-ever (and so far only) victory against New Zealand on Irish soil. Stockdale needed only eight test appearances to run in 10 test tries, the fewest by any northern hemisphere Tier 1 player in the professional era.

In March 2018, he received the 2018 Six Nations Player of the Tournament Award after setting a try-scoring record of 7 as Ireland claimed the title and won their first Grand Slam since the 2009 victory.

Stockdale scored braces in Ireland's victories over Italy, Wales and Scotland, before grabbing another during the Grand Slam-clinching triumph over England at Twickenham.

As of the 2018/2019 Champions Cup, Stockdale has had 8 Champions Cup appearances scoring 3 tries and 15 points.

In May 2019 he made the Ireland RWC Training Squad with 19 caps to his name.

Stockdale was named for the 2020 Six Nations Ireland squad with 25 caps.