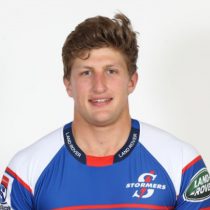 It was more of the same in 2016 for the youngster as he regularly started for Maties and Western Province U21s.

After the 2016 Varsity Cup van Dyk was included in the Western Province Currie Cup qualifiers squad where he made his first-class debut against the Sharks XV.

Just over two months after making his first-class debut, Van Dyk was called into the Stormers squad for their final match of the 2016 Super Rugby regular season against the Kings and made his Super Rugby debut by coming on as a replacement.

He was included in the 2016 Currie Cup squad and represented Maties once again as they reached the final of the competition.

van Dyk was named in the Varsity Cup Dream Team but was unable to play the match against the SA U20s as he was called into the Stormers squad as an injury replacement.

van Dyk made 5 appearances for the Stormers in 2017 and was a key member of the Western Province squad that won the 2017 Currie Cup.