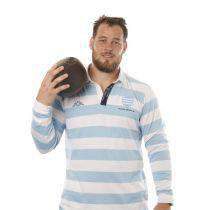 A South African U20 star in 2002 and 2003, Cronje then went on to make his Super Rugby debut for the Bulls in 2003. A year later saw Jacques making his Springbok debut against Ireland and went on to win 32 test caps for South Africa. Moving to the Lions in 2007, the loose forward then linked up with Biarritz for two seasons until Racing Metro acquired his services in June 2009.