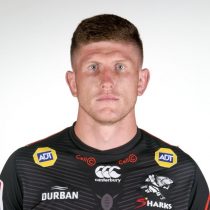 Versatile forward Jacques Vermeulen showed his potential from a young age as he represented Western Province from primary school.

In 2011 he was named in the Western Province under 13 Craven Week side and followed that up with call-ups to the U16 Grant Khomo week and U18 Craven week selections.

In 2013 he was included in the South African Schoolboys side that beat Engand, Wales and France in 2013.

Vermeulen was not included in the intial South African U20s squad for the 2014 U20 World Cup but he was called into the squad as an injury replacement and started 4 of South Africa's remaining matches as they finished runners-up to England.

He was included in the South Africa u20 squad for 2015 U20 World Cup and he represented Western Province in the 2015 U21 Currie Cup.

In 2016 he was included in the Western Province Currie Cup side and made his Currie Cup debut at no.8 in the opening round against the Blue Bulls.

Vermeulen signed for the Sharks ahead of the 2017 Super Rugby and made his Super Rugby debut of the bench in the opening round against the Reds.

Vermeulen took his Super Rugby cap tally to 56 by the end of the 2019 Super Rugby season, helping the side to a playoff in what would be his final season with side after signing a two-year deal with the Exeter Chiefs.

In his debut season with Exeter, Vermeulen helped the side win the Domestic-European double claiming the Champions Cup and Premiership title.