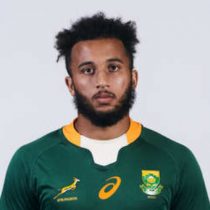 Hendrikse is originally from King William’s Town in the Eastern Cape but it was at Glenwood High School that his sporting talents really blossomed and he became a regular and outstanding member of the famous Green Machine.

Hendrikse has a younger brother, Jordan who plays flyhalf for the Lions.

Having represented KZN at the U18 Craven Week and SA Schools in the U18 International Series, Hendrikse contributed 41 points for the Junior Springboks at the 2019 World Rugby U20 Championship in Argentina, and he was subsequently nominated as one the four Breakthrough Players of the Tournament.


In the colours of the Sharks, Hendrikse faced the British & Irish Lions twice during their 2021 tour of South Africa. In that same year, the 21-year-old achieved a significant milestone when injury in the Springbok squad saw him being called into it where he made his international debut against Argentina.

Hendrikse suffered an injury on his debut but was able to cross the whitewash beforehand.