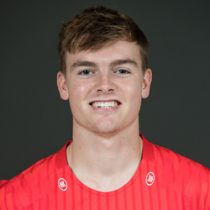 From Tipperary, Flannery was one of the standout performers for the 2019 Grand Slam-winning Ireland U20s and also featured prominently in that summer’s World Rugby U20 Championship.

Now a student at UL, Flannery earned maximum points in his Leaving Cert in 2018 and also made his Munster A debut in the Celtic Cup and his All Ireland League debut with Shannon RFC in the 2018/19 season.

The Shannon out-half who can also play at full-back made his Munster A debut in the Celtic Cup against Dragons A in September.

Jake Flannery joined the Academy in the summer of 2019 having started his rugby career at Kilfeacle & District RFC before progressing to schools rugby at Rockwell College. He underwent a shoulder surgery in 2019 that ruled him out for an extended period but returned to action at the start of 2020.

Returned to action with Shannon in the All Ireland League in January 2020 and made his Guinness PRO14 debut off the bench for Munster away to Zebre in February 2020.