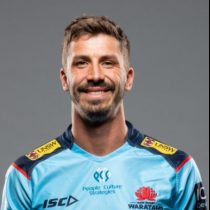 Jake Gordon is a rare breed of halfback in a country that has produced a long line of champion No.9s. Gordon, at 6 foot, 1 inch, became the tallest Wallaby half since Nick Farr-Jones and possibly the tallest of all-time, when he debuted against Italy in 2018.

Determined, hard-working and talented, Gordon’s real strength is around the ruck where his artful running creates boundless opportunities and space for the players around him. Born and educated in Sydney, Gordon played his first rugby for the Canterbury Juniors.

Born in Sydney, Gordon grew up in Newtown and attended Blackwattle Bay School in Glebe, playing his first rugby with the Canterbury Juniors. Upon the completion of his schooling in 2011, Gordon signed with Sydney University Football Club where he faced such tough competition that it was four years before he cemented a spot in the top grade.

Gordon had an outstanding 2015 season in both the Shute Shield and with the Sydney Stars in the Buildcorp NRC, and he also trained with the Waratahs as part of their extended playing squad. The following year he joined New South Wales on a one-year-deal and later played an instrumental part in the NSW Country Eagles NRC campaign where he finished the season as joint leading try-scorer (9). In the same year he was voted as the NRC Players’ Player at the annual awards.

In 2017 an ankle injury to Nick Phipps saw Gordon make his Super Rugby debut against the Lions in Johannesburg. Then, with Phipps still laid low by injury and despite only a handful of senior representative games under his belt, Gordon was called into the Wallaby squad for the trio of June internationals before he deservedly made his Test debut against the Azzurri during the Spring Tour. A consistent Super Rugby campaign saw him earn a call up into the national squad during 2017 but it wasn’t until the year later that he earnt his test debut.

The lively halfback took his Super Rugby cap tally to 39 by the end of the 2018 season and scored a hattrick for the NSW Eagles and earned a call up for the final two rounds of the 2018 Rugby Championship and would make his debut against Italy. He has been consistent at every level of representative rugby, winning premierships with the Students in the Shute Shield and captaining NSW Country in 2019.

In February 2020, Gordon earned his 50th Super Rugby cap for the Waratahs. His continued good form earn him a spot in the Wallabies squad ahead of the 2020 test season and will look to add to his single test cap.