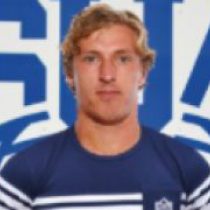 Jake grew up in Alstonville, in northern New South Wales, and made the move to Brisbane to pursue his Rugby ambitions.

He earned selection for Brisbane City in the inaugural season of the National Rugby Championship in 2014, helping steer the side to the championship. His performances in the NRC were rewarded with a Reds Elite Development Squad contract for the following season.

Jake made his Super Rugby debut in 2015 and is looking to add to his 16 caps after impressing for both the Reds in 2016 and Brisbane City.

McIntyre will left the Reds at the end of the 2017 Super Rugby season tp join French Top 14 club Agen for the 2017-18 season. The playmaker was a regular at Agen missing just 7 games over two season making 45 appearances in the TOP14 scoring 322 points.

Ahead of the 2018/19 season, McIntyre signed for TOP14 powerhouse Clermont.

An Australian Schoolboys and Australian U20 representative, McIntyre returns to home soil after spending over three years in Europe, including two seasons as the top scorer for French top flight outfit Agen.

The playmaker, known for his elite skills and decision making signed a two-year deal with the Western Force.