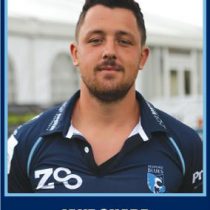 Jake Sharp's professional career started as a dual registration with Saracens and Bedford.

Bedford Blues made the deal permanent in the 2009. His contributions to the blues over the years has led to him being part of the back bone of the team, his pin point accurate kicks and passing game have developed year on year since his permanent move to the Blues.

Sharp made 188 appearances for Bedford, scoring 698 points along the way and helping the Blues reach the British and Irish Cup final in 2011, as well as qualifying for the Championship final in 2013.

In 2016, he was named in the Championship Dream team before joining London Scottish as Player/Coach in April 2017.