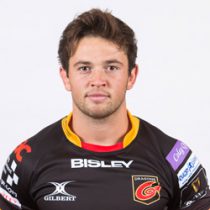 Benjamin progressed through the Dragons Academy and age grade sides. He then moved onto playing for Premiership sides Cross Keys and Bedwas in the back row as Number 8 and Flanker.

He was called into the Wales U20s squad and made his International debut with a win against France in October 2013 after making his debut for the Dragons as flanker against London Wasps the same year.

Benjamin also stepped into the 7s scene as the Welsh Region's played in their first Premiership Rugby 7s Tournament in 2015, in which the Dragons and Blues both got through to the finals at the Stoop.

In December 2017, Benjamin became latest player to commit his future to the Dragons by signing a new three-year contract.

Benjamin has also impressed on the Sevens stage and was part of the Welsh squad for the Commonwealth Games in 2018.

The back row, who can also operate at centre, made his 50th appearance for Dragons in April 2018 at the Principality Stadium against Scarlets.