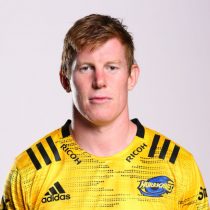 Blackwell hails from the famous Petone Rugby Club in Wellington and played his first season of provincial rugby with the Wellington Lions in 2015 and after a successful 2016 campaign was selected in the Hurricanes.

He has been touted as a player of immense potential since leaving Wellington College where he was the head prefect and captain of the first XV.

He was named to start at lock for the New Zealand U20's in their opening world cup game against Scotland in 2015.

Blackwell made his Super Rugby debut during the 2017 season having being called into the Hurricanes squad following impressive performances for Wellington.

He has carved out a reputation as a hard-working and reliable lock or loose forward. Good in the set-piece at both scrum and lineout, he has deceptive skills with an ability to offload in contact.

He made his debut against the Sunwolves in Tokyo, on the 25th of February 2017.

Blackwell was awarded the Hunters Award at the 2018 Hurricanes Player of the Year Awards. The Hunters Award is given to the Hurricanes player who did not see a lot of game time but always turned up with the right attitude and helped challenge and support the players with their match-day preparations.

He went into the 2020 Mitre 10 Cup having made 42 appearances for Wellington, and has scored 35 points.