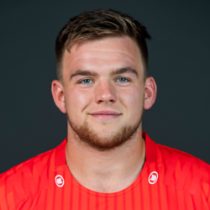 A Bandon prop, formerly a back-row forward, James French played his schools rugby with Bandon Grammar and has represented Munster at U18s, U19s and U20s level. French joined the Munster Academy in the summer of 2018.

French has also represented Ireland U19s and U20s and made five appearances in the 2017/18 6 Nations and made one appearance in the 2018 U20 World Championship. A talented sportsman, French was an All-Ireland schoolboy shot put champion.