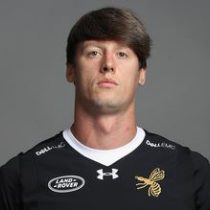 Hailing from Crewe, England, Gaskell is a rangy back row forward who also operates at lock from time to time.

He has excellent athletic ability and has represented England at U18 and U20 level, while he has also previously captained England Saxons.

An industrious, hard-working forward, Gaskell joined Wasps for the 2014/15 season from Sale Sharks.

In the 2018 semi-final defeat at Saracens, it was also his 150th Premiership game ten years after making his debut for Sale.