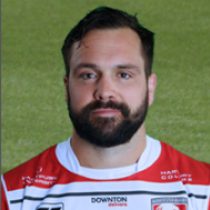 Hanson was born in Brisbane. He played schoolboy rugby at Gregory Terrace and was selected for the Australian Schools team in 2005.

He played his first senior rugby with the University club and was selected for the Australia Under 19 rugby team in 2006 and 2007.

Hanson played in the Australian Rugby Championship for the Melbourne Rebels in 2007. He signed a development contract with the Queensland Reds, and made his Super Rugby debut for the Reds in 2009.

Hanson made his Wallabies debut at Suncorp Stadium Brisbane, Queensland on 20 October 2012. The end result was an 18-18 draw with the All-Blacks in the final Bledisloe Cup match of the season.

Hanson signed a short-term deal with English club Gloucester Rugby in the Aviva Premiership until the end of the year 2017, with an initial plan to rejoin the Rebels.[3] However, on 13 December 2017, it was announced that Hanson had signed a permanent deal to stay at Gloucester.