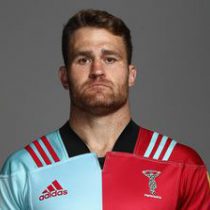 An injury robbed James of the opportunity to lead his country during midseason Tests against Wales and throughout the Rugby Championship in 2012 after he enjoyed tremendous success in the role during 2011, when he was appointed as Australia’s 77th Wallabies captain and leader for the World Cup.

The towering lock first caught everyone’s attention in 2006, impressing coaches and fans with his attitude, enthusiasm and brute strength. He started his inaugural season for the Reds on the bench but soon forced his way into the starting line-up, playing every match of the season in his debut year. Another strong season in 2007, in which he started every match for the Reds, led to his inclusion in the Wallabies squad and his Test debut against Fiji in Perth. James’ first Test try came against Ireland in 2008, the year in which he was made captain of the Reds.

After Captaining the Wallabies during the 2011 World Cup, James added another milestone to his career in 2013, leading Australia against the British & Irish Lions. He was dropped from the captaincy and squad following that B&I Lions defeat and signed for Harlequins but after a good season in England he forced his way back into the squad for the June Tests against England.

In December 2016, his incredible skills secured his place at Harlequins until at least the summer of 2020.

After 40 appearances for Harlequins, scoring five tries, Horwill succeeded Danny Care as captain of the team in June 12, 2017.

He has shown his leadership qualities throughout his time at Harlequins and has regularly taken the captaincy role in the absence of Danny Care through injury or international commitments.

In August 2018, Horwill was named co-captain of Harlequins for the 2018/19 season along with Chris Robshaw.

After over 250 professional games, Horwill announced his retirement from rugby.

Horwill captained his country 16 times, won a Tri Nations during his 14-year-long career. He also won a Super Rugby title with the Reds, who he represented 120 times and he earned over 60 appearances for the Quins.