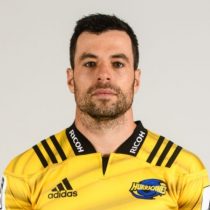 Marshall started his career with Tasman after he made his debut for the Makos in the 2008 Air New Zealand Cup competition, coming on as a replacement against Bay of Plenty. He is the older brother of Crusader Tom Marshall.

In 2009, he suffered an injury in the first match which kept him out for most of the season, but went on and made his first full game against Taranaki.

During the 2010 ITM Cup he made an immediate impact with his decisive running and ability to spot a gap. His strong performances saw him take over Fly-half, mainly starting in the number 10 position throughout the season.

In 2011, Marshall played for New Zealand at the Sevens World Series on the Gold Coast and in Dubai. However, he missed the competition's third leg, in Port Elizabeth, because he returned New Zealand to join the Hurricanes Wider Training Group.

Marshall left for Italy to begin a six-month contract with Aironi Rugby after his name was missing from Super 15 squad selections.

He played his first Super Rugby match in the Hurricanes 29–28 victory over the Crusaders in Week 4 of the 2013 competition.

Marshall become a regular in the Hurricanes starting XV and helped them on their way to lifting the Super Rugby trophy in 2016 before joining English side London Irish ahead of the 2016/17 season.

Marshall was a key feature of Irish’s Championship winning season of 2016/17, contributing eight tries in the process.

Ahead of the 2020 Super Rugby season, Marshall, named for the Hurricanes squad has obtained 53 caps.