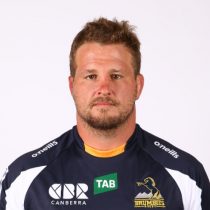 Born, raised and schooled on Queensland’s Gold Coast, James Slipper was widely regarded as one of the elite prop forwards in Australian Rugby from early on in his career. Slipper was impressed early on with his ability to play on both sides of the scrum with extreme excellence.

He captained The Southport School to the 2007 GPS title although he was far from the only star in a team that included fellow future Wallabies Ben Tapuai, Rob Simmons, Luke Morahan and Jono Lance. Slipper subsequently won selection for the Australian Schools and in 2009 he was voted Australia’s player of the U21 World Championship.

His early promise saw him being fast-tracked into the wider Queensland Reds squad by coach Ewen McKenzie for the 2010 Super Rugby season and he made his debut in round one, a mere four months later he endured a baptism of fire in his maiden Test against England in Perth at the age of 21. He continued his meteoric rise playing in all six of Australia's matches in the 2010 Tri Nations Series and 13 of the Wallabies 14 Tests during 2010.

After an impressive 2011 Super Rugby season with the Reds - which ended with a tournament win - Slipper was firmly in contention for a place in the final 30-man squad going to the World Cup. An ankle injury threatened to derail his campaign but coach Robbie Deans backed the youngster and Slipper went to the World Cup providing vital cover across the front-row and played in all of Australia's games during the tournament.

Over the next four years leading up to the next Rugby World Cup Slipper established himself as a permanent fixture in the Wallaby squad playing in 41 test matches and won the Reds’ Pilecki Medal for Player’s Player of the year in both 2013 and 2014.

He continued to be a main fixture in the side and in 2015, Slipper was honoured with the captaincy when he led the Wallabies against the U.S.A in Chicago, a game which the Wallabies won 47–10 victory. Slipper was selected as part of the Wallabies' 31 man squad for the RWC and helped the side to a second-place finish losing to the All Blacks in the final.

He continued to be a main feature in the test side in 2016 making 12 appearances in the Gold and Green before a combination of injury and personal issues disrupted his 2017 and 2018 seasons however a move south to the Brumbies in 2019 revitalised Slipper’s career.

He ruptured his achilles tendon in late 2019 but made his return in October for Queensland Country against the Fijian Drua and was named in Michael Cheika's Wallaby squad days later to face the Barbarians. He impressed once again at the Brumbies on both sides of the scrum and was named in Michael Cheika's Rugby World Cup squad that would fall to England in the quarter-finals of Slipper's third Rugby World Cup.

He would take his test cap tally to 96 at the World Cup in Japan and in March 2020, Slipper signed a two-year contract extension with the Brumbies and Rugby Australia committing his future until at least the end of 2022.

In November 2020, Slipper become the 8th Wallaby to play 100 test matches and just the second prop to reach the milestone for Australia.