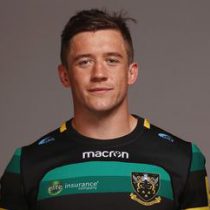 Bedford-born Jamie Elliott made his debut for the Saints in the LV= Cup in 2011 whilst only 18 years old.

A product of the Saints Academy, 2011 also saw Jamie mark his first Premiership start with a try-scoring appearance in an important away win against Sale Sharks.

Since then Jamie has become a regular starter on the wing for the Saints with a nose for the try line that simply cannot be taught. He has found himself regularly on the score sheet for the Saints and was awarded Young Player of the Season, as well as top try scorer for 2012/13. That season saw him score a run of 10 tries in 12 league matches.

Jamie didn’t take long to make his mark in 2013/14 either, scoring the Saints’ and the Premiership’s Try of the Season at Gloucester in stunning fashion.

In 2018, Elliot left Northampton Saints and signed for Bedford Blues.