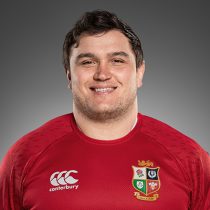 An energetic and hard-working front ranker, Jamie George has developed into a world class modern day hooker with his work at the set pieces and his skills around the park.

A graduate of the Saracens Academy, George joined the London club's Academy at the age of 14 with the hooker making his senior Saracens debut in November 2009 after a loan spell at Southend. He carved out a regular spot in the match-day 23 in the 2010/11 season with the club winning its maiden Premiership title. His progress has rocketed since.

George represented England at Under-16, U18 and U20 levels and is a giant of a man and a powerful scrummager from the middle of the front row. His development at Saracens skyrocketed thanks to the experienced Schalk Brits and John Smit - who both mentored the Academy product while at the club.

On 29 May 2015 George was promoted to England's extended 50-man training squad for the 2015 Rugby World Cup. George replaced 66-test veteran Dylan Hartley in the squad after Hartley was suspended for head-butting George in a Saracens vs Northampton Saints fixture.

George started the 2015 Aviva Premiership Final and was the centre of added pressure and attention due to his promotion to the England squad. He responded well and starred during the match, running in one try from over 30-metres out, and passing the ball to Chris Wyles for his try.

He made his test debut for England in the build up to the Rugby World Cup against France and was announced in Stuart Lancaster's 31-man squad for the 2015 Rugby World Cup - just 5 days after his test debut. In January 2016, George was named in Eddie Jones' first senior England squad for the 2016 Six Nations Championship and made his Six Nations debut against Scotland, replacing captain Dylan Hartley in their 15–9 victory on 6 February 2016.

He also appeared against Italy and Ireland while going on to tour Australia scoring a try in the 3rd test in Sydney. With the national side, George has won two Six Nations, been part of a victorious 3-0 whitewash series in Australia and was a mainstay as Eddie Jones’ team equalled a world-record run of wins.

Despite being second choice hooker for England in the 6 Nations, George was selected in Warren Gatland's 41 man British & Irish Lions squad to New Zealand. George had been capped 17 times for England at the time of selection.

On the tour to New Zealand, George started all three games for the Lions in the drawn series. In October 2017, George signed a long-term contract extension with Saracens, putting pen to paper to a new deal that will keep him in North London through to 2021.

Now a regular starter for both club and country, George helped Saracens secure the Premiership and Champions Cup double during the 2018/19 season and was included in England's Rugby World Cup squad. George went to his second World Cup with England in 2019, helping the side reach the final of the tournament.

In July 2020, George committed his future to Saracens having already played 226 times for his boyhood club since his debut in 2009 and has signed on until 2023. George has won five Premiership titles with Saracens as well as three European titles, he has also won two Six Nations, been part of a victorious 3-0 whitewash series in Australia. As of July 2020, George has 52 test caps to his name (3 with the Lions) with 23 of his caps coming in the starting XV.

In May 2021, George gained selection for the British & Irish Lions tour to South Africa that same year.