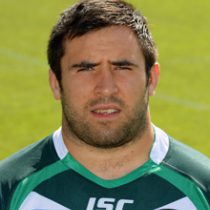 The Gormanston College graduate represented Leinster at Academy level, but after failing to secure a full professional deal moved to Connacht in 2009. Playing at tight head prop, Hagan was extremely impressive for Connacht during his two year stint in Galway.

He represented Ireland at a Youth, U-18 and U-20 level and was a member of the 2007 Ireland Under-20 Grand Slam winning squad.

Hagan opted to re-sign for Leinster in 2011 and made his international debut against against the USA in 2013.

He has notched up over 100 professional appearances for Connacht, Leinster and London Irish, playing in the Premiership, Pro12 and Heineken Cup/Rugby Champions Cup. The prop's only try in 11 years of profession Rugby came in Leinster’s 42-13 victory over Ulster on Boxing Day in 2011.

Early in 2015, Australian Super Rugby side Melbourne Rebels announced that they had signed Hagan on a two-year deal. He will be just the second fully capped Irish international to ever play Super Rugby.