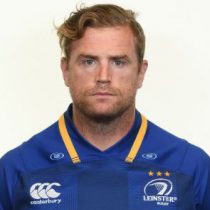 Born in Israel, where his father was on United Nations Interim Force in Lebanon duty, Heaslip began his caeer with Naas RFC, before progressing to the Leinster academy.

Heaslip was part of Ireland’s 2004 Under 21 World Cup running up squad in Scotland. Heaslip excelled in the tournament, and was nominated for the player of the tournament award.

Heaslip made his senior Leinster debut in 2005, and became one of Leinster’s and Ireland’s most important players. Heaslip was known for his open field running and try scoring capabilities.

The Leinster forward made his international debut in the 61-17 win over the Pacific Islands in November 2006 and captained the national side on 13 occasions.

Of his 95 Ireland caps he played the full 80 minutes on 72 occasions illustrating his value as both a player and a leader to the national team.

Jamie is one of the most successful players in Ireland's professional era. A member of the 2009 Grand Slam winning side he was also a key player in the Championship winning teams of 2014 and 2015.

He played at two Rugby World Cups featuring in all 10 of Ireland's games at the 2011 and 2015 tournaments.

His last appearance in the green shirt was against Wales in the 2017 Six Nations Championship in Cardiff. He scored 13 tries for his country including the World Rugby Try of the Year against Italy in 2016.

He played his part in securing Ireland's first ever victory over the Springboks on South African soil in 2016 and just a couple of months later featured prominently in Ireland's historic first victory over New Zealand in Chicago.

A two time British and Irish Lion he made 5 Test appearances across the 2009 and 2013 tours of South Africa and Australia.

At provincial level he won three Heineken Cups, an Amlin Cup and three Celtic League/Pro12 titles with Leinster and was shortlisted for World Rugby Player of the Year in both 2009 and 2016.

Heaslip finished his Leinster career with 229 appearances, scoring 38 tries for the Irish province.

Capped 95 times by Ireland and a two time Lions tourist, Heaslip is considered the most durable player in Irish rugby, he signed deal to remain at Leinster under national contract until July 2020.

However, in February 2018, Heaslip announced his retirement from the game, bringing down the curtain on an illustrious career.

In December 2020, Heaslip was given the coveted Try of the Decade award after a fantastic passage of play from the Irish saw him dot down against Italy in 2016.