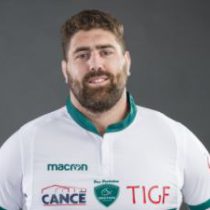 Mackintosh showed early promise as he played for every national age-grade side for which he was eligible.

The loosehead joined the Southland NPC squad in 2004 and continued to impress representing the Highlanders that same year.

He played an instrumental part in the Southland Stags lifting the Ranfurly Shield from Canterbury in 2009 and 2011. Mackintosh also made his All Black debut on the northern hemisphere spring tour in 2008.

His sole test cap came against Scotland in 2008 before he joined Montpellier in 2015 in a medical joker role, playing four Top 14 games before earning a permanent contract with Top 14 competition rivals Pau in 2016.

Mackintosh made his first-class rugby debut in 2004 with Southland, clocking up 123 games for the Stags over 12 seasons.

The frontrower helped the Stags win the Ranfurly Shield twice and played 67 times for the Highlanders, including a couple of seasons as captain.

He was released by the Highlanders after the 2013 season, but continued to play for the Stags until leaving for overseas in 2015.

Mackintosh had a season in the United States with the Ohio Aviators between his first stint with Montpellier and joining Pau.

Having left Pau, he re-joined Pau as cover for the World Cup.